In April of 2016, after years of political wrangling, sweat and tears, the U.S. Department of Labor (DOL) unveiled the so-called Fiduciary Rule.

The rule was to take effect in April of 2017 and, at its core, was meant to require all financial advisors to act in their clients’ best interest (i.e. as “fiduciaries”) with regard to their retirement savings.

The passage of the Fiduciary Rule was hailed as an important win for millions of mom-and-pop investors. It would have arguably enabled them to receive better investment advice, as well as keep more of their hard-earned savings through a reduction of fees related to investment selection, management, and administration.

Making Wall Street Great Again
As part of a broad push against all government regulations, on February 3, 2017 President Trump issued an executive order requiring a review of the Fiduciary Rule and delaying its implementation.

Many interpret this order as a prelude to the rule’s ultimate demise.

Outcry from consumer advocates was loud and included the likes of Jack Bogle, who had the following to say about Gary Cohn, Trump’s director of the National Economic Council: 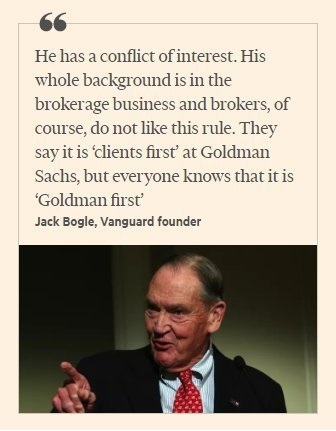 Making Sense Of It All

Understandably, there has been a lot of confusion about the rule itself, as well as what its repeal may mean.

On the surface, the repeal is good news for Wall Street and bad for ordinary investors.

In theory, Wall Street brokerage and investment firms would be able to resume their practice of over-charging for investment products and advice, without worrying about the consequences for their clients.

If history is any guide, the above would be accompanied with the traditionally inadequate transparency and disclosure.

Most adversely affected by the rule’s repeal would likely be the millions of American workers who are participants in their employers’ 401(k) plans.

Historically, these retirement plans have been among the least transparent and most laden with expensive and mediocre investment products. The most noxious feature of many 401(k) plans remains their built-in restriction on the participants’ ability to choose the best available investment products.

The (Fiduciary) Cat Is Out of the Bag

We would argue that even if the DOL’s Fiduciary Rule is ultimately repealed, Wall Street will not see a return to its glory days.

In our opinion, the most important benefit of the Fiduciary Rule was not the rule itself, but the fact that the long and fierce public debate around it served to educate millions of Americans about how the investment industry works and how to find those who will act in their best interest.

Even the current effort to euthanize the rule is again shining a bright spotlight on the investment management industry and making even more Americans aware of its pitfalls.

Consequently, the rule’s repeal would do nothing to slow the current torrent of billions of hard-earned dollars fleeing traditional brokerage firms and going to the likes of Bogle’s Vanguard and independent fiduciary advisors.

In fact, should Wall Street try to stick to its “old ways,” this deluge would certainly accelerate.

Even the hamstrung 401(k) plan participants will continue to see the industry yield to their pressure. Recent very public lawsuits against the rampant over-charging in 401(k) plans have forced plan providers and administrators to improve investment selection quality and reduce fees.

What Should You Do?

The Fiduciary Rule’s repeal would obviously not mean the end of fiduciary advisors. However, it would prolong the sorry existence of financial salesmen masquerading as advisors.

This state of affairs puts the added responsibility back on you to understand who is providing your investment advice and whether their every decision really starts with your best interests.

Here are several things you should do:

1. Ask – Ask your current advisor whether they are a fiduciary and, most importantly, a fiduciary to you. If this sounds confusing, in our work for clients we have run across several investment advisory firms with related subsidiary businesses – some fiduciary, some not. Legal? Yes. Ethical? Hardly.

2. Show Me The Money – If your advisor’s answer to the above question is not clear, then ask how they are compensated. Fiduciary advisors cannot accept any compensation that would create a conflict of interest. Therefore, they cannot get commission revenue from transactions or kickback revenue from products they invest your money in.

3. Trust, But Verify – Finally, even if your advisor assures you they are a fiduciary to you, it makes sense to verify the claim. The easiest way to do this would be to look at account statements as well as advisor invoices. If your portfolio is primarily invested in expensive mutual funds and your advisor is charging you too much for their advice, chances are your advisor is either not a fiduciary or, for some reason, failing to exercise their fiduciary duty to you.

If you are not comfortable doing the above, seek help. There are many reputable advisors out there who will gladly give you a free, no-obligation second opinion on how your money is managed.