As noted in our December review, 2017 was a surprisingly strong year for financial markets: nearly all asset classes posted healthy gains. The S&P 500 gained more than 20%, emerging markets 30+%, and even the stodgy bonds had a positive calendar year return.

In December the US Congress passed the much-awaited tax-reform bill, which seemingly gave US corporations and Wall Street another significant boost.

Not surprisingly financial markets sprinted higher in the opening weeks of 2018. By the third week of January, the S&P 500 was almost +8% higher.

Amid this bullish bonanza, many analysts revised their 2018 forecasts even higher, and many pundits were singing praises to the rosy economic conditions and unstoppable bull market.

No one was immune from this euphoria, not even our clients. We had more than a few ask us during annual reviews why their portfolios had “under-performing” assets like bonds and were eager to be more aggressive with their investments.

In hindsight, it is obvious that the euphoria was a clear signal of an end rather than a new beginning. After all, didn’t a wise man once say that bull markets “die on euphoria?”

Sure enough, during the last week of January and first week of February, the S&P 500 dropped more than 10% with unexpected swiftness, erasing all of January gains and then some. 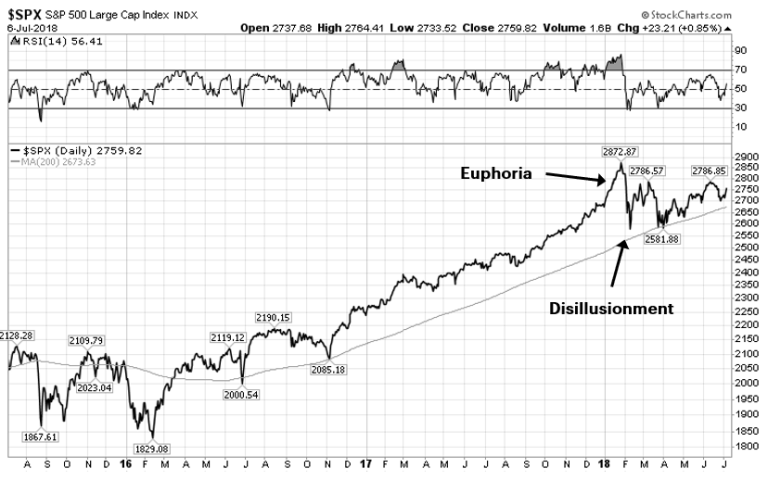 Following this reversal, most asset classes meandered around the flat line for the remainder of the first quarter. With the exception of real estate all finished the quarter in a narrow range between -2% and +2%.

Volatility remained elevated during the second quarter. However, US equity indices moved largely higher, led by small caps and a handful of mega cap tech stocks.

Holders of other asset classes were not as fortunate and Q2 brought a wider separation between winners and losers.

As the prospect of a global trade war moved from threats to tariff skirmishes, international stocks and bonds suffered a broad exodus. Emerging markets, in particular, went from the most beloved asset class in 2017 to the most shunned.

First half performance of major asset classes spanned a fairly wide range between more than +10% for Nasdaq to almost -8% for the hapless emerging market stocks.

Despite index strength, it was not all wine and roses for US stocks. Winners were concentrated in a few sectors (cyclicals, technology, energy), while financials, industrials, and staples had a significant lag.

As we start the second half of the year, the markets are trying to come to terms with several key concerns.

Investors have yet to regain their bullishness and the collective euphoria everyone felt in January seems like a bad joke. 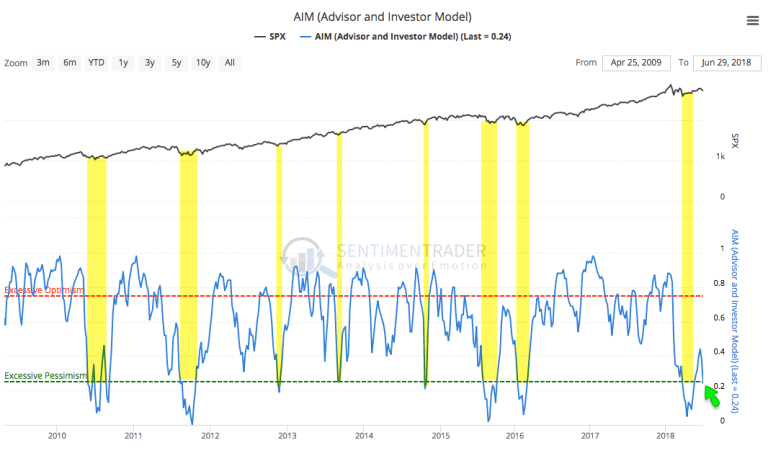 So, what is it that has everyone so concerned?

First and foremost is the prospect of the continued escalation of the global trade war that has seen the United States initiate a series of tit-for-tat tariff measures against almost every trading partner.

You do not need an advanced degree in economics to realize that countries imposing tariffs on goods and services produced in other countries will hurt consumers and producers on both sides and this is hardly supportive of economic growth.

The second concern is the US yield curve as it continues to flatten and closer to “inverting” (i.e. short duration yields becoming higher than long duration yields). Yield curve inversion is arguably the most reliable leading indicator of a recession and this is the reason the shape of the yield curve is currently receiving so much attention. 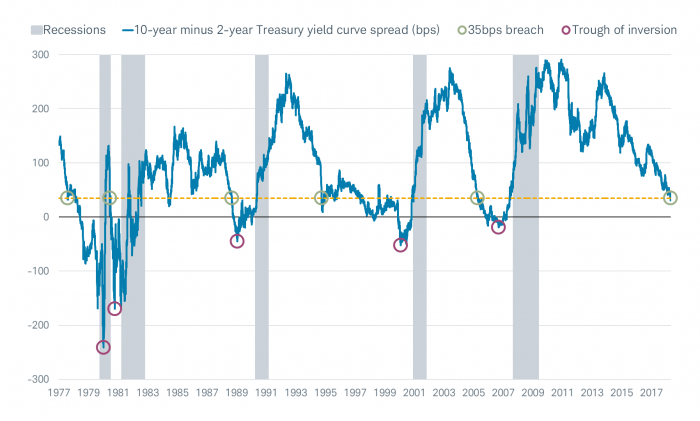 Another major concern is the strength of corporate earnings and their potential future trajectory.

The already strong 2017 earnings were given a strong boost by the tax reform. As a result, current earnings and estimates for the coming quarters are fairly high. In theory, this should be beneficial for financial markets, but it leads us closer to the inevitable earnings cycle peak and decline, which could spell the end of the current expansion.

Needless to say, earnings are also susceptible to any escalation of tariffs, inflation, or generally rising interest rates.

Climbing the Wall of Worry

The bullish counterpoint to all of the above is that this seems like the quintessential “wall of worry” situation that the market loves to climb.

As we have seen above, widespread euphoria is typically not bullish. Current caution and pessimism is a much better recipe for gains over the next six months.

Trade war concerns will likely remain at the forefront for the rest of the year, keeping volatility elevated and acting as a brake on upward progress.

However, it is not hard to imagine a scenario where the current administration will be extremely motivated to scale back their trade war ambitions and look for opportunities to claim even small victories as we approach November mid-term elections.

The yield curve may be getting flatter, but it is not inverted yet. History suggests there is usually a significant lag between yield curve inversion and an economic recession.

Finally, the moderation in stock prices we saw in the first half, along with continued increase in corporate earnings brought valuations back to their long-term averages. This could be another bullish factor for stocks in the second half of 2018.

Our ability to predict the future remains somewhere between lousy and poor.

Our overall bias for the second half is mildly bullish and we are cautiously optimistic that we will see continued gains for US equities.

We also expect that beaten down asset classes (emerging markets) and sectors (financials, industrials) will do better in the second half of the year as the current headwinds weaken or become fully priced in.

The biggest downside of articles like this one is that they are often interpreted as a “call for action” by some investors looking for data, ideas, and validation to best position their own portfolios.

We want to make clear that this is definitely not our intent.

History has clearly demonstrated that any long-term investor trying to position their portfolio in anticipation of or reaction to events is very likely to cause themselves financial harm over time.

Aside from ensuring you have an investing plan that is tailored to your personal objectives and circumstances and sticking to it, our answer to what one should do in response to anything mentioned above will always be simple and boring: Nothing.

As many of you are no doubt aware, doing nothing is easier said than done. In January, it was hard for many investors to do nothing and resist the euphoria, even though this was clearly the best course of action.

Similarly, it is now hard for many of those same investors to resist the global doom and gloom and sit tight.