Brief summary of this situation: A son went to an Internet forum asking what his 67-year old father should do with his $1.8 million in stock of General Electric (GE). He also noted that this holding represented almost 90% of his father’s stock portfolio.

We thought this scenario raised some very important points about investing and securing your financial future.

In particular we will focus on what we think are the three key lessons we can all take from it.

Lesson One: Concentration is a (Very Sharp) Double-Edged Sword

The old adage about not putting all eggs in one basket certainly applies here. Concentrating most of your savings into one stock or asset is never a good idea.

Yes, there will always be stocks like Amazon, which more than quadrupled over the past 3-4 years.

Even more frequent are stocks like GE, which has lost approximately 70% of its value in a little more than a year, the decline starting right around the time the son sought advice from the Internet. 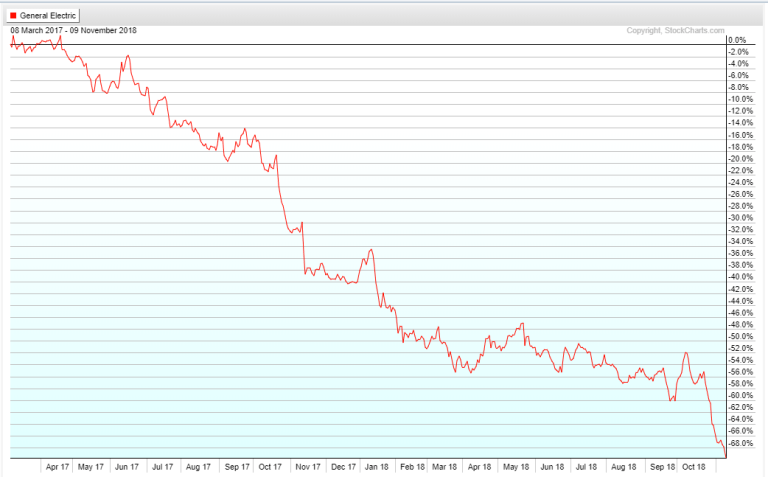 Assuming the son was unable to convince his father to reduce his GE holdings, the stock portfolio shrunk from $1.8 million to under $600,000 today.

Keep in mind the above is hardly a unique situation or something that has never happened before. It keeps recurring more often than it should and impacting people who should know better.

Those of you who have lived through the last few bear markets probably remember the countless Dot-Com paper millionaires who lost it all.

The same happened to many employees of Enron who had their entire 401(k) accounts invested in their employer’s stock.

The same repeated itself (again!) in 2008 to many Bear Stearns employees who had all of their retirement savings and bonuses invested in the company’s stock and essentially lost everything.

While it is impossible to avoid losses in investing, you can and must take steps to prevent one stock or asset from causing devastating and permanent damage to your life savings.

The highlighted response to the son’s question outlines a very common and dangerous misconception about stock dividends.

A presumably well-meaning online Samaritan going by “normanc1962” responded to the son that, since GE was paying a 4% dividend at the time, the stock price ups and downs were nothing to worry about. As long as the father held the stock, he would receive about $72,000 in dividend payments every year in perpetuity.

The fallacy is the assumption that dividends are somehow fixed or guaranteed.

Nothing could be further from the truth. A company’s management has the ability (one may even say it is their duty) to reduce, suspend, or even eliminate dividend payments if they deem that this is in the company’s best interest.

There are certainly companies that have paid regular and stable dividends to their shareholders for decades. Ironically, General Electric was part of this elite club.

However, GE’s recent financial struggles have forced the management to rightfully focus on preserving capital.

The father’s expected income from dividends was therefore reduced from $72,000 to about $720 per year and even this payment may be in jeopardy if GE’s financial position continues to deteriorate.

Lesson Three: The Internet is a Terrible Financial Advisor

The Internet has arguably become the most important tool for all of us. Beyond funny cat videos, we rely on the Internet for almost everything in our personal and professional lives.

However, the Internet is still not a place where one should seek critical financial or investment advice, especially not from strangers in chat rooms even if all of them are genuinely trying to help.

There is nothing wrong with the son trying to be self-reliant, learn, and figure things out on his own.

However, critical matters like your financial or physical health require the help of experienced and qualified professionals.

Asking strangers for advice with a family’s financial health is little different from trying to learn how to remove your own inflamed appendix.

We will never know how the story of the concerned son and his father’s GE stock ended. We can only hope the father somehow saw the light and made the right moves to protect his hard earned retirement savings.

Our hope is that the rest of you will remember this story and never put yourself in a situation where you may end up committing the same mistakes.