Of Wheat and Cash

My father grew up on a farm in the middle of the Balkans during World War II. Even though he was only seven years old at the start of the war, he remembers these times vividly and has a million stories to regale anyone willing to listen.

One story that has always stuck in my mind is how my father’s family struggled to protect their food. In those times paper money was nearly useless: there were no bank branches or stores where one could buy goods. Gold, jewelry, and similar valuables were a better store of value, but it was still difficult to use them to feed a family.

The best and most liquid currency of the day was wheat (as well as corn). Having it meant you were much more likely to survive, at least not starve to death. Aside from being able to make bread, it was easy to literally use wheat as currency and barter for eggs, meat, milk, or other goods. As farmers with plenty of land, my father’s family was very wealthy.

However, their wealth was always under threat from various armies or armed gangs roaming the countryside. As fortunes of war shifted, one month their area would be occupied by the Germans or their allies, next month it may be the Serbian Royalists, the following month perhaps the Communist Partisans. All of them were armed and, friend or foe, they were hungry and needed to be fed.

To protect their wealth, the family resorted to harvesting their wheat mostly at night and hiding it in a series of well-camouflaged and hidden “pits” (essentially holes in the ground reinforced by wooden boards) in nearby hills and forests. As further protection, only a few family members knew the location of the pits and they made their “withdrawals” in strict secrecy and mostly under the cover of darkness.

As clever as this wealth management strategy was, it was not without downsides. Aside from the obvious risk of someone finding the pits, this was a terrible way to store wheat. The family lost 30-50% of each harvest to rot, mold, and mice. Still, this was rightfully deemed an acceptable risk: the alternative of having the entire harvest confiscated would have been much worse.

I think of this story often as we work to help our clients build and preserve their wealth. Thankfully, none of our clients need help hiding wheat, but we do see parallels in how many of them approach holding cash.

We find that almost every new client holds too much cash and in some cases it almost amounts to hoarding. When we ask the purpose extra cash serves, most shrug and say something like: “well … just in case.”

Industry data seems to indicate this may be a broad financial behavior. A 2019 study of savings account balances showed that people in their 50s and 60s hold between $45,000 and $55,000 on average in their savings accounts, see chart below.

It is similar with investment accounts. As Michael Batnick of Ritholtz Wealth Management pointed out in a recent article, the average cash position in a defined contribution account (e.g. 401(k), etc.) has been close to 13% over the last 10 years. 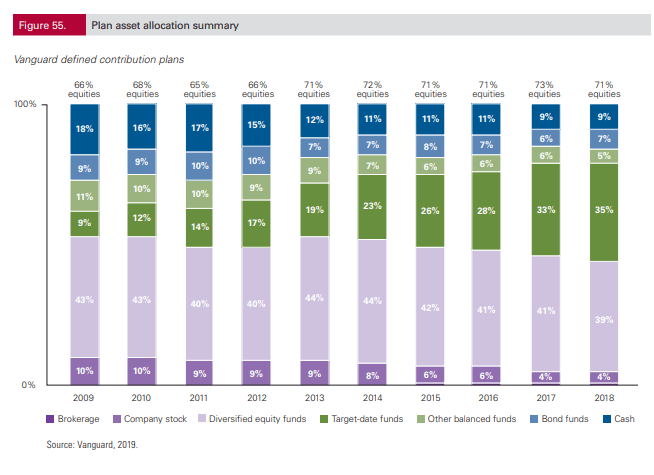 What is the Problem?

In this age of debt and deficits, it may seem absurd to suggest that having too much savings or cash is somehow an issue. For the record, it is always infinitely better to have too much cash rather than not enough or to be in debt.

There is also nothing wrong with cash as an asset class. All of our client portfolios have the flexibility to make an allocation to various cash funds depending on specific client objectives and circumstances.

However, holding too much cash “just in case” does have a negative effect on someone’s ability to build or even preserve wealth.

Batnick’s analysis in the above article points out that a “fully invested 60/40” portfolio would have outperformed the portfolio holding 18% in cash by about 1.25% per year (9.4% vs. 8.13%) over the last 10 years. For a $100,000 portfolio this translates into a significant cost of about $25,000 due entirely to holding excess cash for 10 years. Obviously, holding an even higher percentage of cash and/or for a longer period of time would only increase this cost.

We also often see clients holding excess cash in checking accounts. Over the last 10 or so years, central and other banks have done a great job getting all of us accustomed to earning essentially 0% in most bank accounts.

Seeing a healthy cash balance on bank statements may be emotionally comforting, but most clients don’t realize that they effectively losemoney every year by keeping it in a low- or non-interest-bearing account.

The loss comes from a reduction in purchasing power as inflation continually eats away the value of cash. Assuming the inflation rate of about 2%, a $100,000 stuffed under the proverbial mattress loses $2,000 in purchasing power per year. It’s a much better loss rate than a World War II wheat pit, but this is still a non-trivial loss that can be easily avoided.

Finally, we also believe that the traditional “Rainy Day fund” guidelines are dated and need to be revisited. Most people spend decades working while keeping six months or a year’s worth of living expenses in cash. In many situations it may be more effective to keep that money invested in some mix of stocks and bonds and consider converting it to cash only in the unfortunate case when it is needed (e.g. following a job loss or a similar life event).

There are several scenarios under which we think holding extra cash makes sense.

The first is the situation where someone is saving for a well defined short-term spending objective such as buying a car, house, or paying for a kid’s college education. If that purchase is within one to two years, it makes little sense to risk that money in stocks or bonds.

The second is the situation where having a well-defined amount of cash allows someone to sleep better at night and stick to their long-term investment plan. This may sound silly and trivial, but emotions are a critical, yet often overlooked, part of investing and managing them is as important as managing a portfolio. As Batnick put it: “investing is not about maximizing returns, but about maximizing returns that you can reasonably be expected to achieve.”

Regardless of the scenario, it is important to make sure any and all cash is as productive as possible: it should be kept in a place where it will earn a competitive rate of return to best protect it from the inevitable inflation-induced rot.

In summary, cash is clearly an important asset class. However, its primary purpose should always be to provide liquidity for short-term spending needs. It should never be the cornerstone of a long-term wealth accumulation strategy. Given that it generally does not keep up with inflation, one should also be careful when using it for wealth preservation purposes.